In case you were wondering why our favourite whiskey brand Johnnie Walker is trending on Twitter today, well, stick around with us and we’ll take you through it. The brand marks 200 years since inception and among the celebratory activities planned is the ultra-limited release of some of their striking, limited-edition 200-year bottle,

From a humble grocery store in rural Scotland, 200 years ago, to being the world’s leading Whisky, what a thrilling ride it has been! Celebrate with our striking, limited-edition 200-year bottle, raise your glass and Keep It 200. #JohnnieWalker200 pic.twitter.com/15qjPuSmJI

Many of the people you see gracing the labels of today’s top brands are fictional. Betty Crocker? Never existed. Aunt Jemima? Made-up character. Trojan man? Total fake. However, there’s one fellow that you’ll find on most people’s shelves at home that 100% existed: Johnnie Walker. Even with some twists and turns in the tale of Johnnie Walker history, you can be sure that when you twist the cap on that square bottle with the angled label, you’re part of a long line of drinkers that started with a real human being who answered to the name, “Mr. Walker.”

The Man, the Myth, the Legend

The legendary, original John Walker was born on July 25, 1805, on Todriggs Farm, Kilmarnock, East Ayrshire, Scotland. The farm was not far from Glasgow on the west side of the island. In 1819, John’s father died, and the family farm where little Johnnie had spent the first fourteen years of his life, was sold. Though he was still but a little lad of 15, the proceeds from the sale were used to purchase a grocery store inside Kilmarnock proper. After a short time apprenticing to learn his new trade, John took over full management of his thriving business.

A Grocer with an Idea

Even though his main trade was selling groceries, over time he became well known as the go-to supplier of tea, fine wines, and spirits. He sold all kinds of alcohol, including rum, brandy, and gin, but it was his own private label whiskey that gained him recognition in the region. Most shop owners of the day stocked single malts, with inconsistent taste and texture. Mr. Walker, being a savvy businessman, made his whiskey through blending, giving him the ability to maintain good flavor quality in every bottle. 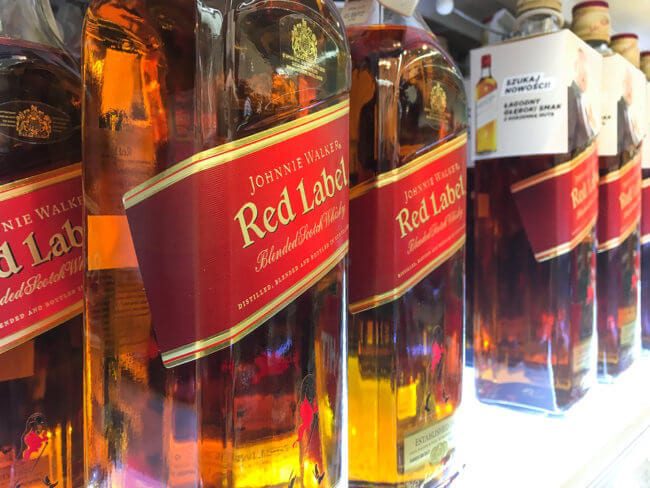 The Ups and the Downs

In 1833, John married Elizabeth Purves, who later gave birth to their first son, Alexander. John was known locally as a member of trade associations and the Freemasons. A major flood damaged many local businesses in 1852, and reports show that his entire stock was ruined. It took almost two years to rebuild the business, but afterward, the popularity of his signature blend continued to grow until his death in 1857.

After his death, the family business was taken over by Alexander. Britain was at the center of the Industrial Revolution, and with the arrival of the railroad in 1843 on his side, Alexander Walker created a distribution network that shipped John’s whiskey worldwide. By 1862, sales averaged 100,000 gallons each year. The first copyrighted blend, called “Old Highland Whisky,” hit the shelves in 1867. This recipe is a direct ancestor of what we know call Johnnie Walker Black Label.

The famous square bottle and 24 degree-slanted label were introduced shortly thereafter, creating a distinctive look, and reducing breakage compared to the previously used round bottles. Many historians consider Alexander the real driving force that took Johnnie Walker scotch whiskey from hometown bestseller to a globally recognized brand. Alexander’s sons introduced the naming conventions of “Red Label” and “Black Label” in 1909. Around the same time, the original sketch of the sophisticated walking man was created and added to the bottles. The brand website puts it best: “At a stroke, John Walker the Victorian grocer became Johnnie Walker, the Edwardian dandy.” 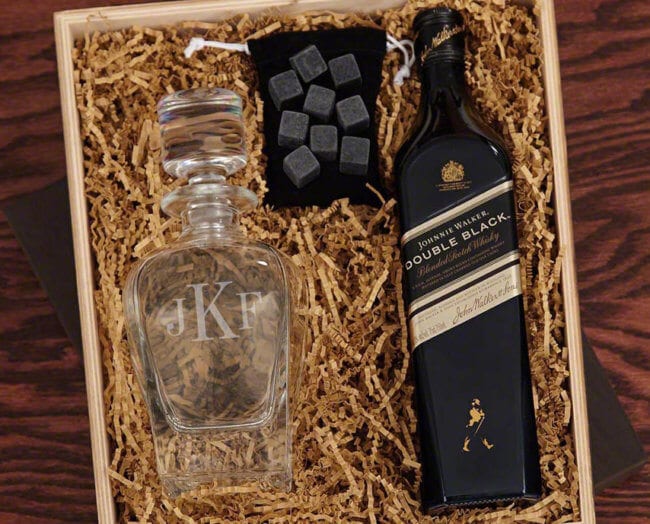 The Story Goes On

The company has continued to grow, of course, adding Blue, Double Black, Gold, and Platinum label Johnnie Walker to the line. Now among a portfolio of brands owned by a large international company, the whiskey is no longer distilled in Kilmarnock, and the original plant has been demolished. Though the facilities are gone, you’ll still find the resilient, Scottish spirit of the original Johnnie Walker in every sip.

Always waking up grumpy? Change your alarm tone from default tone to your fave hit song!