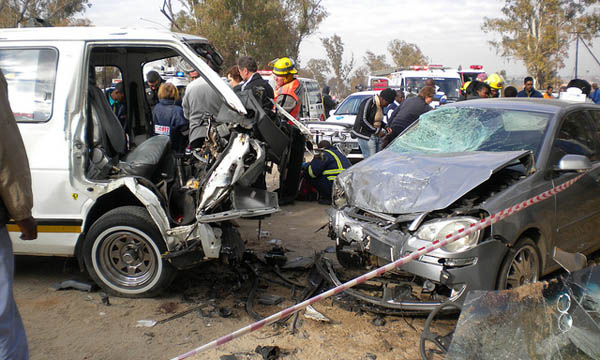 Let’s all be honest with each other, this past Christmas was nothing short of a tragic day in South Africa. As if learning about the death of Robbie Malinga yesterday was not enough, the death toll on road accidents has drastically risen.

Christmas Day accidents claimed the lives of a number of people across the country, despite warnings by the road traffic management centre (RTMC) to motorists to take extra care.

Two people, an adult and a child, were killed in a collision on the R24 approximately 10 kilometres outside Rustenburg on Monday morning.

ER24 Spokesperson Werner Vermaak said shortly before 8 am paramedics, fire services and other emergency services arrived at the collision scene where they found the two vehicles mangled together.

“Sadly, an adult male and a young girl was found with fatal injuries inside one of the vehicles,” said Vermaak, adding that five others suffered “minor to moderate injuries”. Paramedics treated them on scene before taking them to nearby hospitals.

Police are investigating the cause of the fatal collision.

Two people died and another sustained minor injury after two cars collided along the R501, about five kilometres outside Carletonville, in the early hours of Christmas morning.

ER24 Spokesperson Annine Siddall said at about 03.00 am paramedics arrived at the crash scene and found a man and woman had been ejected from one of the cars.

“They were lying about 15 to 30 metres from the car. Paramedics assessed the man and woman and found that nothing could be done to save their lives and they were declared dead,” said Siddall.

Another man who had sustained minor injuries was treated before he was taken to a nearby hospital.

Local authorities were on scene and are investigating the cause of the fatal crash.

A 36-year-old woman, her three-year-old  toddler and three people were injured on Sunday on the N12 in Kimberley in the Northern Cape, when a bakkie overturned, paramedics said.

ER24 spokesperson Annine Siddall said the mother and toddler sustained minor to moderate injuries. She said paramedics arrived on the scene at around 4.20pm and found the woman and toddler lying in a field next to a bakkie.

“The woman and the three-year-old child were treated for their wounds and transported to Mediclinic Gariep for further medical care. Three more people were injured in the collision and treated by other emergency services on scene,” Siddall said.

“The exact circumstances surrounding the incident are not known to our paramedics.”