The Gossip Cop publication has dropped a shocking new revelation about Angelina Jolie and Brad Pitt’s marriage. Apparently, the two are still moving forward with their divorce, despite reports that they are both reconciling.

Earlier in the week, Gossip Cop busted a similarly inaccurate cover story from Us Weekly, the sister company of the National Enquirer and Star. The tabloid maintained Jolie and Pitt’s divorce was off and they were getting “back tougher.” As we noted, the divorce is not off, and they’re still proceeding, albeit at a slower pace.

Now, an alleged “insider” tells E!, Pitt and Jolie are “taking a breather and seeing what happens.” But the outlet seems to be parsing out certain remarks each have made in interviews about the difficulties of splitting up and co-parenting, and using it to back up its premise that the divorcing is “not moving forward” and “a lot has changed since Angelina filed.” “They want to make sure they are doing the right thing,” says the site’s supposed “insider.”

The online publication further contends Pitt’s sobriety and “self-improvement” has “really changed” their relationship. And notes E!, things have de-escalated so much that Pitt “spent Father’s Day in L.A. with [their kids].”

While it’s true that things have smoothed out a bit for the pair, the site’s story is actually incorrect. Among the minor errors is that Pitt spent Father’s Day with his six children. Actually, he saw them the day before and they left Los Angeles for Addis Ababa, Ethiopia that day, as Gossip Cop originally reported and was documented in numerous paparazzi photos. 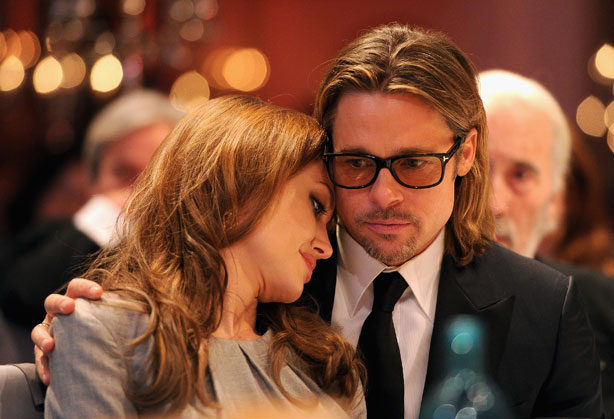 But the larger issue is Pitt and Angelina are absolutely still moving forward with their divorce. Gossip Cop is assured by an impeccable insider that the process has simply “slowed down.” “They aren’t reconsidering anything,” says an individual close to the situation, who adds, “At least he isn’t.”

Another source speculated that perhaps the spin about Pitt and Jolie possibly reconciling is a “way to distract from her Vanity Fair debacle about the Cambodia kids casting call.” Regardless of why or who is feeding this narrative about Jolie and Pitt “not moving forward” with their divorce, it’s wrong. Gossip Cop has reached out to reps for Jolie and Pitt for comments.

Although generally reliable, E! has struck out before with its reporting about Pitt and Jolie. In March, the outlet wrongly claimed Pitt secretly joined Jolie and the kids in Cambodia while she promoted First They Killed My Father. And while he was occasionally there last year when she filmed the movie (and they were still a couple then), he did not visit Jolie and the children in Cambodia six months after they split up. At the time, Pitt’s rep confirmed to Gossip Cop the actor was not in Cambodia then.

In much the way that fans had hoped Pitt and Jennifer Aniston would get back together, the reality and the fantasy are not going to intersect. Our sources reiterate the divorce proceedings are not going full steam ahead as Jolie had initiated them, but she and Pitt are not inching toward some fairy tale ending. The new claim about the divorce “not moving forward” is untrue.

DJ Euphonik turns down a crazy in love Skolopad.