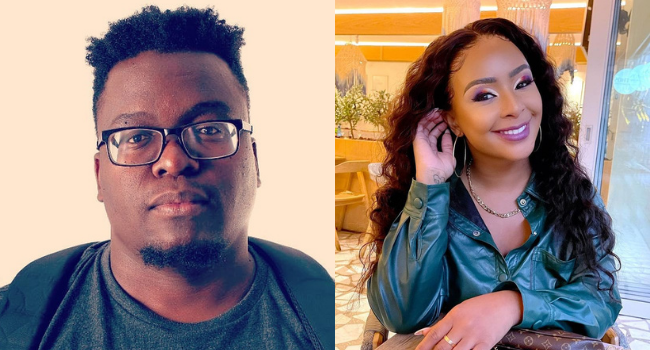 Local celeb Boity Thulo recently got attacked and it left some of her associates affected by the unfortunate happenings surrounding her. The recent attack has made one of her close associates reminisce and give gratitude to her, she is wildly known by many for her generous and helping spirit and it was evident when media persona Sol gave context about how much she holds it down for the ones she loves. Sol gave Boity praises for holding him down through hard times while he was dealing with his gambling addiction. Following her attack, Phenduka had a very truthful chat with MacG about how Boity holds a very special place in his heart Sol credited the celeb for having helped him overcome one of the darkest phases of his life as he overcame addiction.

While discussing Boity’s recent traumatic incident on MacG’s Podcast and Chill, Solomzi mentioned just how distraught he was to hear that something so tragic had happened to such a loving individual. ZAlebs reports that when commenting on the assault, the radio personality said it was a rather difficult topic for him to tackle because both parties are dear friends.

Sol said Boity had done so much for him that nobody even knew about. Expanding on that he said: “When I was down and out, I reached out to her, and she helped me. I remember my granny had just passed away and I was a mess at that time, and I didn’t want my family to see me like that. No one in my family knew where I was, and I was renting a small place in town.” Phenduka recalled a specific incident when Boity came through for him. “I called because she had assisted me before when I was recovering and when I needed cash. I needed to look good for my grandmother’s funeral and she said no problem. She sent me R4k, and I looked dapper.”

Boity had released a statement asking her followers to allow her some space and privacy to heal both emotionally and physically from a physical quarrel with the well-known Bujy Bikwa. The media personality has not taken a break from her socials but has instead taken to Instagram to send out a message that she will always fix her crown and own her throne even in the worst of times.

TNS taking action against police who used excessive force on him

Nkazimulo Ngema, better known by his stage name as TNS, stated that he was a victim of a forceful arrest

Getting to know the real Kim Kardashian – Before fame

Here’s why Dr Musa stands out amongst men!

AKA and Nadia Nakai were once an item

“I spent some millions on this”: Offset buys Cardi B a house as a birthday gift