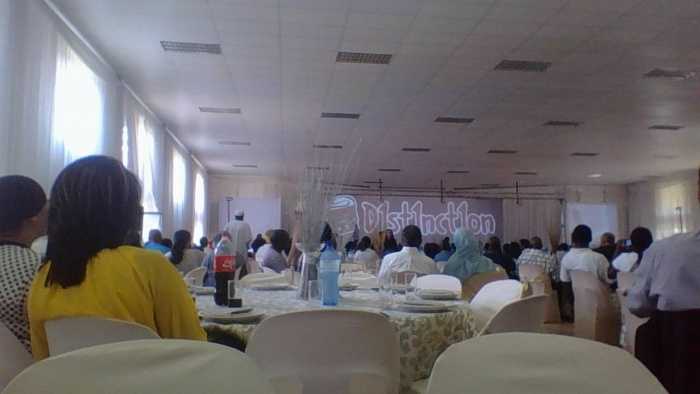 Who said top achievement goes unnoticed? Who said being a nerd during your matric year is lame? Regardless of the political instability in our beautiful country, some people out there still care about education and have a very entertaining yet classic way of applauding it.

Let us cut to the chase, there is a project out there named ‘’PROJECT DISTINCTION,’’ a project in which involvement and participation is key… this is no ordinary gossip folks, it is a drive that is really out there and is making waves.. on Saturday E-SA witnessed it with our own gossip eyes.

Everything was just exquisite, from the lights till the tiles… the decor enhanced the beautiful hall, just shows how much effort was put into making sure that this event was a success.

As much as we love gossip and entertainment, we wouldn't know how to read the word ''entertainment'' if it wasn't for education… Mandela stated that ''education is the key to success,'' and well, I support that a 100%. If we loved education as much as we loved ourselves, we wouldn't be having a problem with foreigners, we wouldn't even know the words ''kaffer, kuli, boesmaan,'' we would only know the words ''brother and sister,'' so project distinction is a great initiative to actually motivate education in our background hoods.

You must be sitting there and wondering, what is project distinction? Wonder no more because Project Distinction is a rewards programme targeted at matric pupils in the Benoni and Lenasia area, motivating our future generation to work harder at achieving higher grades, not to mention recognizing the mentioned learners and awarding them.

The banquet involved a lot of entertainment like comedy, revolutionary video clips, motivational speeches and of course, luscious food.

A wise speaker known to E-SA said something that touched my heart, he said: ''If you squash a hundred Rands, throw it down, step on it, and ask someone if they still want it, regardless of what happened to it, we would still want it. Because it has value, same applies to your life. You will get squashed, trampled on, get mocked… but that must not devalue you.

What was even more entertaining was to see a well know personality, I am talking about our celeb, Hlubi Mboya who said a mouthful, which I personally felt should be shared with you dear gossip lovers… she motivationally said:

''champions, I believe champions have faith, whether you go to church, Mosque< Temple or Synagogue, evry champion has faith.

As a person, you have to believe in yourself because at the end of the day, nobody will accept you besides yourself.

Take responsibility for your words and actions. (Especially on social networks)

Get the small things right… after all, it is the smallest things that count

Preparation is key, always be prepared for the good and the baddest.

Always be a momentum/ give everything you do your 110%

Be persistent, be resilient.’’

She also passed on a very important message to leaders out there.

''YOU ARE A LEADER IN YOUR OWN RIGHT.

YOU ARE A MAN/WOMAN WHO MAKES CHANGE

Leadership is about EMPATHY, EMOTIONAL CONFIDENCE, and obviously, HUMILITY is everything.

LEADERS ARE GO-GETTERS WHO INSPIRE OTHERS TO MAKE A DIFFERENCE, AFTER ALL, SOMEONE HAS TO LEAD AND IT MIGHT BE YOU!

SUCCESS TO ME IN CLOSING, IS TO WIN THE RESPECT, ENDURE THE BETRAYAL OF FALSE FRIEND, TO APPRECIATE BEAUTY, TO FIND THE BEST IN OTHERS, OF INTELLIGENT PEOPLE, TO WIN THE AFFECTION OF CHILDREN.’’

Among the speakers who shared their wisdom were the one and only Wits SRC general secretary, Fasiha Hassan who also said a few words.

''WELL DONE TO EVERY SINGLE MATRICULANT IN THIS ROOM WHO HAS MADE IT OUT OF MATRIC REGARDLESS OF THE ISSUES YOU ARE FACING WITH THE BASIC EDUCATION STRUCTURE.

FOCUS ON YOUR ACADEMICS, THEY'RE VITAL, BUT THEY ARE NOT EVERYHTING. THE REASON WHY I'M SAYING THIS IS BECAUSE ON THE 14TH OF JANUARY, WE WOKE UP AND DECIDED TO STAND ON THE GATES OF UNIVERSITY, BECAUSE WE BELIEVED IN FIGHTING FOR YOUR QUALITY EDUCATION. IN TEN DAYS, THE POWER OF A MOBILIZED YOUTH, SHOOK THE GRIPS OF AN UNJUST JUSTICE SYSTEM.’’

Well folks, a lot was said, I do not want to steal their spotlight… In terms of more info about this great initiative, best advice is to go on Facebook, search the term ‘’D1ST1NCT1ON’’ and jpoin the group… you will see what exactly everyone is talking about. While you still on Facebook, invite your friends to like E-SA.

Article by Tebogo Nkabinde and many thanks to Hajira.