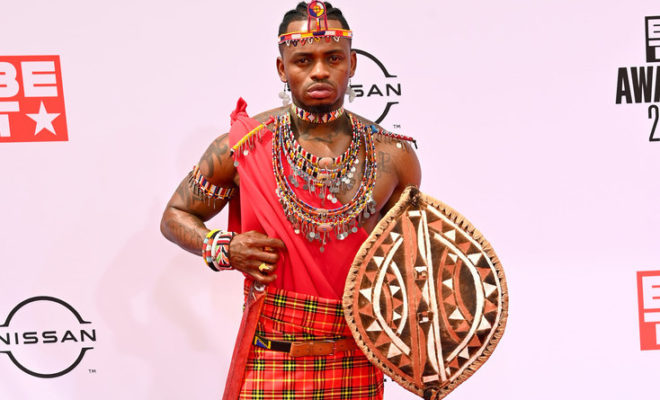 Bongo star Diamond Platnumz showed up at the Microsoft Theatre in Los Angeles, US, for the BET Awards and immediately became the centre of attraction.

The singer, nominated for the Best International Act, decided to represent the East African region and its culture as he dressed like a Maasai warrior. In photos shared by him and many other outlets on Social media, the singer could be seen in the Maasai attire with lovely headgear and a shield in his left hand.

He also had a mini-sword well packed on his right side with ornaments all over his body. A tweep quoted a picture on his Twitter, noting he was representing the #Swahilination.

Nice outfit… It's Showbiz so you have to show up and show out!!! And what better way than showing up in a TZ traditional attire 🔥🙌🏾

As for the awards, you either Win or LEARN; never Lose. Kudos @diamondplatnumz pic.twitter.com/mmZAvt6UqC