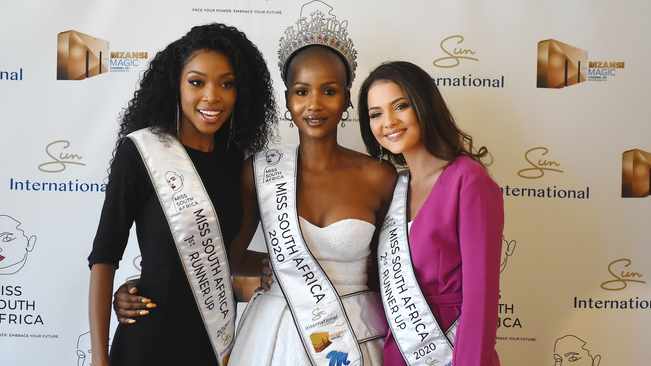 This year’s Miss South Africa top three contestants are set to represent Mzansi on three different global stages in 2021, with reigning Miss South Africa 2020 Shudufhadzo Musida participating in the Miss World pageant, she is be hoping to follow in the footsteps of Rolene Strauss who took the title in 2014.

Prior to this, the Miss South Africa Organisation sent a representative to Miss Universe and Miss World only, but next year will be fielding a candidate to Miss Supranational. Last year Miss South Africa 2019 Zozibini Tunzi represented the Rainbow Nation at Miss Universe and won the title, while first runner-up Sasha-Lee Olivier took part in Miss World.

Miss World, the oldest existing major international beauty pageant and which started in the UK in 1951, proudly celebrates its 70th anniversary in 2021 when Toni-Ann Singh of Jamaica will crown her successor. The edition was originally scheduled for the end of 2020 but postponed due to Covid-19. The pageant is scheduled to take place in the second half of 2021.

Musida will be following in the footsteps of three Miss South Africas: Strauss, Anneline Kriel, and Penelope Coelen who won the Miss World title in 2014, 1974, and 1958 respectively.

“I am so excited to be going to Miss World, particularly as it celebrates a milestone anniversary, and following in the footsteps of those who have gone before me. It is an amazing opportunity and I can’t wait to represent this country and have the words ‘Miss South Africa’ blazoned across my chest. I want to do South Africa proud!,” says Musida

The moment you have been waiting for South Africa! 🇿🇦

Thando Thabethe is offering young girls the opportunity to explore the media industry!

Huawei, in Partnership with Boity is giving away the Huwawei GT2 watch!