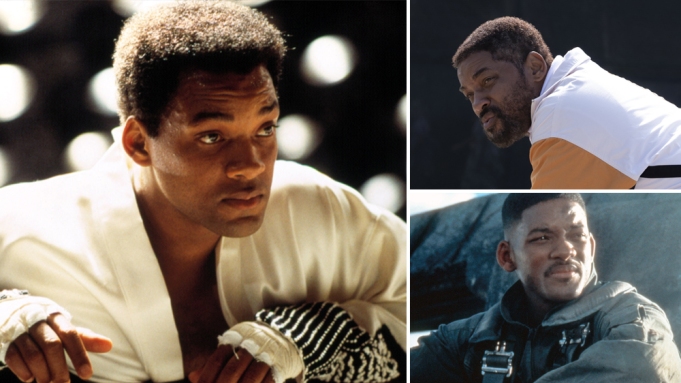 If Tom Hanks is America’s Dad, then Will Smith is the cool big brother. Smith has received some of the best reviews of his career for his performance as Serena and Venus Williams’ father in “King Richard,” which is finally hitting theaters this weekend, in addition to streaming on HBO Max. After the world premiere at the Telluride Film Festival in September, Smith has emerged as one of the leading contenders for best actor. To celebrate the movie’s opening, Variety is ranking the 10 best performances of his film career so far.

Smith has been a favorite of audiences and awards voters during his impressive, three-decade career. He’s explored multiple genres, such as drama, comedy, action, science-fiction, horror and animation.

With two Academy Award nominations to his credit for Michael Mann’s “Ali” (2001), as famed boxer Muhammad Ali, and Gabriele Muccino’s “The Pursuit of Happyness” (2006), as single father Chris Gardner, the third time could be the charm for the Philadelphia-born actor and producer.

As one of the producers on “King Richard,” if the film is nominated for best picture, along with best actor for Smith, he would become only the second Black man to be recognized in both categories in the same year. The first was Denzel Washington for “Fences” in 2017.

While this list focuses solely on Smith’s film performances, one of his most iconic roles was on TV as the titular “Fresh Prince of Bel-Air.” Smith nabbed his first Emmy nomination this past year as one of the producers for Netflix’s “Cobra Kai.”

The scene that proves it: “Don’t ever do that again.”

I can recall seeing “Hitch” with some friends during college, and they reveled in Will Smith’s athletic prowess. This time felt like the transitional period for Smith as an acclaimed actor, who can be a box office juggernaut and still elevate pretty standard material. With Kevin James and Eva Mendes by his side, he brings an effortless approach to his role as a love doctor. https://2ea6606f48391c8795697115b6f16540.safeframe.googlesyndication.com/safeframe/1-0-38/html/container.html9

The scene that proves it: “Don’t ever say I wasn’t there for you.” (running chase through Miami)

As “The Fresh Prince of Bel-Air” was gearing up for its final season, and the world still hadn’t learned about his box office draw, Will Smith partnered with Martin Lawrence for the action classic “Bad Boys” from Michael Bay. In Smith’s new memoir, he speaks about the famous scene of running through Miami, which is the film’s highlight, and how Bay felt he made him “a movie star” with that run, which he trained for with a track coach. Bay was right. 8

The scene that proves it: “Now that’s what I call a close encounter.”

One part of a dynamite cast that includes Bill Pullman, Jeff Goldblum and Vivica A. Fox, Will Smith was king of the movies after the success of the alien-invasion film. Funny one-liners, intoxicating allure and a good enough sense to not come back for the sequel, is everything that makes Smith so great. https://2ea6606f48391c8795697115b6f16540.safeframe.googlesyndication.com/safeframe/1-0-38/html/container.html7

Distributed by: Sony Pictures
Directed by: Barry Sonnenfeld
Written by: Ed Solomon (based on “The Men in Black” by Lowell Cunningham)

The scene that proves it: “He’s just really excited and he has no clue why we’re here.”

The box office smash was heightened by the sensational chemistry between Smith and Academy Award winner Tommy Lee Jones (“The Fugitive”). With an Oscar-worthy comedic performance from Vincent D’Onofrio as a bug in a human suit, Smith brought his charm, comedic sensibilities and wit to the film.  6

Distributed by: Metro-Goldwyn-Mayer
Directed by: Fred Schepisi
Written by: John Guare (based on “Six Degrees of Separation” by John Guare)

The scene that proves it: “I was wondering if I could fuck you.”

Will Smith’s work in the adaptation of the Pulitzer-Prize-winning play is often overlooked and underseen in his filmography. As Paul, a skillful con-artist claiming to be the son of actor Sidney Poitier, Smith held his own against Donald Sutherland and Stockard Channing, in her sole Oscar-nominated performance.  https://2ea6606f48391c8795697115b6f16540.safeframe.googlesyndication.com/safeframe/1-0-38/html/container.html5

Distributed by: Walt Disney Pictures
Directed by: Guy Ritchie
Written by: John August, Guy Ritchie (based on “Disney’s Aladdin” by Ron Clements, John Musker, Ted Elliott, Terry Rossio and “Aladdin and the Magic Lamp” from “One Thousand and One Nights”)

The scene that proves it: “Prince Ali”

On paper, this live-action remake of the children’s animated classic, with Will Smith taking on the role that Robin Williams voiced (and should have been nominated or won an Oscar for), should have been a disaster. Don’t underestimate the charm of Smith, along with a diverse and beautiful cast that includes Mena Massoud, Naomi Scott and Nasim Pedrad. Smith was able to own the role, show off his vocal chops and help make the ninth-highest grossing movie of 2019. 4

The scene that proves it: “God did not intend for us to play football.”

Will Smith’s portrayal of Nigerian physician Dr. Bennet Omalu was risky, considering the subject matter of the film. Going head-to-head with the NFL can have dire consequences on your career (ask Colin Kaepernick), and despite the film not being received as warmly with critics, his performance was still praised. Despite a Golden Globe nomination, he didn’t receive an Oscar nod, which was one of the snubs that sparked the #OscarsSoWhite social justice campaign. https://2ea6606f48391c8795697115b6f16540.safeframe.googlesyndication.com/safeframe/1-0-38/html/container.html3

The scene that proves it: Sleeping in the bathroom.

Smith’s portrayal of a single father and homeless salesman was in many ways ahead of its time. Two years prior to the financial recession, a role and film such as this probably would have struck a greater chord with audiences, critics and voters. Despite that, he nabbed his second Oscar nomination for best actor, introducing his real-life son Jaden Smith to cinema-goers everywhere. He ultimately lost the prize to Forest Whitaker for “The Last King of Scotland” (interestingly, Smith is the only Black former nominee to lose all of his awards to a Black winner).  2

The scene that proves it: “The most dangerous creature on this whole earth, is a woman who know how to think.”

One of the frontrunners in the best actor race, Smith’s incredible ability to tap into the complexities and emotions of real-life figures has always been his strong suit. He’s unafraid to portray Richard Williams as a flawed man, not necessarily trying to redeem his past misgivings, but showing that human behavior is not just black and white. Questionable actions can have the best intentions. His performance is heightened by the works of his glorious co-stars, particularly Aunjanue Ellis, Saniyya Sidney and Jon Bernthal. https://2ea6606f48391c8795697115b6f16540.safeframe.googlesyndication.com/safeframe/1-0-38/html/container.html1

The scene that proves it: “Float like a butterfly, sting like a bee. Rumble young man, rumble.”

Visionary director Michael Mann’s take on 10 years of the life of famed boxer Muhammad Ali gave Will Smith the role that would let everyone know that he’s one of the most talented actors of his generation. While not drawing the massive box office numbers that usually mark a Smith-headlining film, it was well-received by critics and brought him his first Oscar nomination. He ultimately lost to Denzel Washington, whose historic win for “Training Day” came alongside Halle Berry’s victory for “Monster’s Ball.” While the race might have been between Russell Crowe (“A Beautiful Mind”) and Washington, looking back, he arguably might have been a formidable spoiler in that race (alongside Tom Wilkinson for “In the Bedroom”). Nonetheless, his navigation of a complex man, with no impersonation in sight, stands as his greatest gift (for the moment).