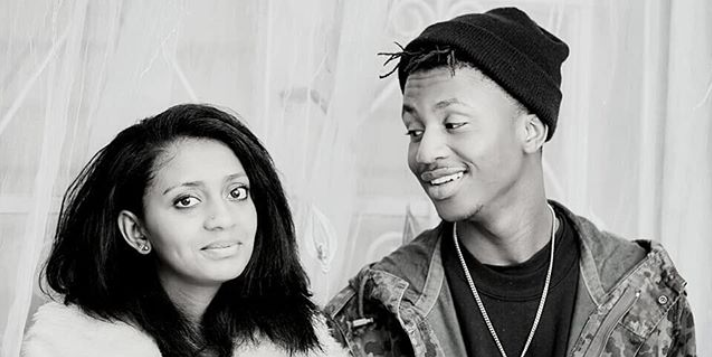 Rapper Emtee has revealed that his wife, Nicole Chinsamy has been physically abusing him over the years and he is now afraid of her.

His real name is Mthembeni Ndevu, he bared it all in a series of emotional posts on social media in which he outlined some of the abuse he has been facing.

Emtee alleged that he is currently at a friend’s house because Nicole had locked up their home and gone to her parent’s place. Writing on social media, the rapper wrote,

Ang’safuni lutho nje. Ngibizelwa yiz’gora Zabo Bhuti bakhe. Omalume no mama wakhona who tried to choke me and I saw the evil in her as she was holding me by the throat against the wall.

Ngizofela into engingayazi ngenxa yalo sisi. Angaz why she always tryna make me feel like I ain’t shut when I’m a goat of note. I’m currently tweeting from my big homie crib cos she took the keys to my spot and went to her parents naso.

I haven’t freshened up in 2 days cos I can’t stand being in the same room as this person. She’s hit me, bruised me and choked me over the years so I’m scared FR.

I don’t understand how you sweet to everyone but bitter towards me. Same nigga that’s putting on the table. I’m done with all this shit mane. My kids will have to forgive me dawg. I gotta split before shit ends in tears. I love my kids to death.

All of a sudden my Instagram that I just got back yesterday after months of tryna get it back. This person helped me get this account back, now she deactivated my shit n now I’m back to square one.

When the musician was questioned on whether he still loved his wife, he responded with an unequivocal no.

When another social media user cautioned Emtee not to spill too much about his private life, the musician responded saying that he was tired of the abuse and was okay with being a laughing stock.

Last year, the Roll Up hitmaker’s parents spilt the beans during an exclusive interview with Sunday World, warning their son not to tie the knot with his baby mama.

Emtee’s parents Phathiswa and Lumkile Ndevu accused Nicole of being a golddigger who was only interested in their son’s money.

This is how long till we won’t be seeing Dumi Masilela’s part on Rhythm City!

Independent film-maker Kagiso Modupe refuses to benefit from his actors