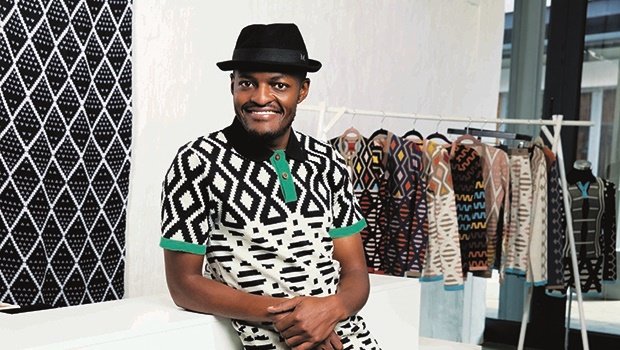 Local designer Laduma Ngxokolo has raised the country’s flag high on international scales by designing costumes for Coming to America 2.

The internationally acclaimed South African based designer recalls being called by the head of the costume to co-work with her on a few pieces for the Coming 2 America film. The founder of AmaXhosa fondly recounted this memory on Twitter yesterday and says he enjoyed every minute of working on this project with his team.

“@LadumaNgxokolo Got a call from the QUEEN of costume design @therealruthecarter in 2019 to co-work with her on a few @MaXhosaAfrica pieces for the Coming 2 America film, the rest was history and history was made.  My team and I enjoyed every minute of working on this project. #Coming2America.”

Maxhosa is a celebrated South African knitwear brand founded in 2012 by Laduma Ngxokolo, a knitwear collection that pays homage to the traditional aesthetics of the AmaXhosa people who occupy the South Eastern coastal parts of the country. This is the second time in a week that a South African creative fashion designer causes waves on social media. Earlier in the week drama unfolded on the social media streets after Twitter reacted to South African-based designer Rich Mnisi, who revealed his new collection with items costing up to a whooping R60k.

Amongst Twitter users who congratulated Laduma on the milestone was advertising maverick and founder of marketing and brand consultancy company DNA Brand Architect Sylvester Chauke.

“@sylvesterchauke We continue to be proud of you and your team.”

Coming to America 2 is a sequel to the 1988 original Coming to America starring Eddie Murphy and Arsenio Hall in the roles of Prince Akeem and Semmi respectively. The production became a box-office hit with a worldwide gross of more than $280 million. More than three decades later, the comedy earned its legendary place in black film culture and both actors are set to reprise their roles as Akeem and Semmi. Laduma is not the only South African talent to contribute to the film, South African actress and media personality, Nomzamo Mbatha, is also part of the cast of the movie. Mbatha shared the exciting news on her Instagram page.

Water the seeds of your heart’s desires with gratitude and thankfulness. #Coming2America See you on March 5th on @amazonprimevideo …Shalom Shalom.”

In the sequel, the hilarious comedy takes us back to the fictional royal country of Zamunda, Akeem has now ascended to the throne as King. He finds about a son he has and did not know about in America and heads back with BFF Semmi to where it all began in Queens, New York.

A trailer has already been released by Amazon Prime Video where the film will be available for streaming on Friday, March 5.

Gwen Stefani looks a whole lot like a Christmas tree