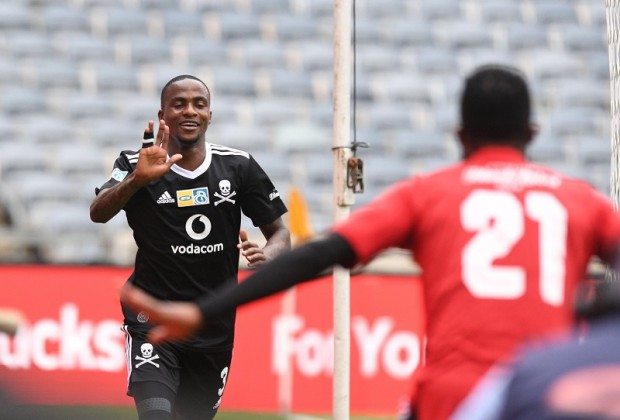 Thembinkosi Lorch has is a star player and he has just proven it again when he led his team, Orlando Pirates to victory. The soccer team have won their first round, 1st leg CAF Confederation Cup clash against GD Sagrada Esperanca in Angola.

The Soweto giants won 1-0 and will take an all-important away goal into the return leg on Wednesday, January 6. The venue and kick-off time for that match is yet to be confirmed. After not scoring anything for the first half, Pirates broke the deadlock thanks to a goal from Thembinkosi Lorch in the 75th minute at the Estadio dos Coqueiros.

Orlando Pirates will certainly enjoy their festive period as they end the year with a 12-match unbeaten streak across all tournaments. They are fifth in league after seven matches – one fewer match than their rivals – with 13 points, five behind log leaders Mamelodi Sundowns.

The Buccaneers will return to action on Saturday, January 2 in a mouth-watering clash against Sundowns at Loftus Versfeld in Pretoria. Kick-off is at 15:30.

Meanwhile, Sundowns themselves were impressive 2-0 winners earlier on Tuesday in their first round, 1st leg CAF Champions League clash in Botswana.

The Buccaneers walk away with a vital away victory and an important clean sheet. Lorch’s 74th minute goal is the difference between the two sides. #OnceAlways