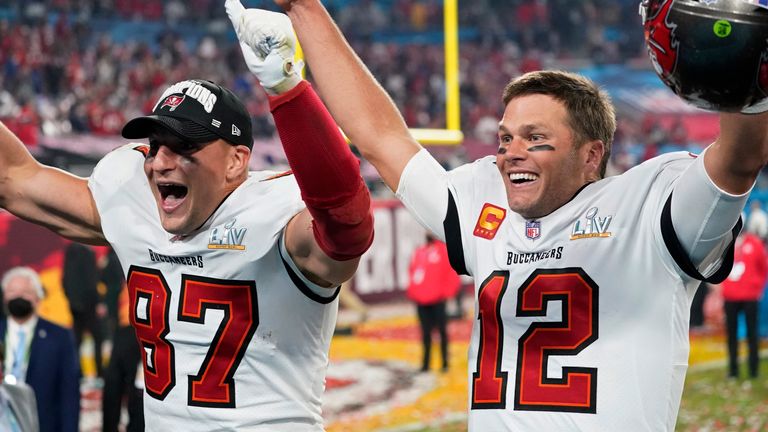 Tom Brady and Rob Gronkowski combine for two TDs to surpass Joe Montana and Jerry Rice for the most scores by a duo in playoff history (14) and Super Bowl history (five); Patrick Mahomes suffers first loss of more than 14 points in his 54 career starts in the NFL

Brady and Rob Gronkowski rolled back the years as the former New England Patriots pair connected for two first-half touchdowns, seeing them surpass Joe Montana and Jerry Rice for the most scores by a duo in playoff history (14) and Super Bowl history (five).

Congratulations to the greatest of all time.

Brady capped a near-perfect half of football with a third scoring strike to Antonio Brown to see the Bucs up 21-6, while Leonard Fournette became the fourth Tampa Bay player not on their roster 12 months ago to find the endzone when he broke free for a 27-yard TD in the third quarter.

Brady, who completed 21 of 29 throws for 201 and three touchdowns, was named Super Bowl MVP for a record-breaking fifth time in his storied career, while Tampa Bay picked up their second Vince Lombardi Trophy having also won to cap the 2002 season.

Joel Glazer lifts the Vince Lombardi Trophy as the Tampa Bay Buccaneers win the #SuperBowl for the second time! 🔴⚫ pic.twitter.com/pmEXjgHhYW

Kansas City came back from a 21-10 fourth-quarter deficit to defeat the San Francisco 49ers in last year’s Super Bowl but, this time, trailing 31-9 heading into the final period, there was to be no stirring fightback – despite the best, improvised efforts from a banged-up Patrick Mahomes.

Mahomes was tormented throughout by a relentless Bucs pass rush which feasted on a makeshift Chiefs offensive line due to injury, while Tampa’s young defensive backs held up their end of the bargain.